The anniversary of the massacre at the offices of Charlie Hebdo has inevitably generated some reflection in the media. Some people dug out what they wrote at the time to see how they’d fared, a new BBC documentary was screened and several commentators have written their ‘one year on’ pieces.

Glenn Greenwald became such a commentator when he posted Where Were the Post-Hebdo Free Speech Crusaders as France Spent the Last Year Crushing Free Speech. Normally you would have to pay me to read Greenwald but after having been so revolted by his post-Hebdo article a year ago I was intrigued to find out what the 12 months had taught him.

As it turns out, not very much.

The gist of his piece is that people that stuck up for Charlie Hebdo’s right to do what they did seemed not to care when other speech was threatened. It’s an argument about double standards. To justify it he gives examples to support his impression of inaction and links to his magnum opus of false equivalence from last year (I criticised it at the time here).

I don’t approve of hate-speech laws. I don’t agree with holocaust-denial laws either. I don’t think BDS campaigners should risk arrest under any speech laws and although I think Dieudonné M’bala M’bala is an antisemite and a terrorist sympathiser I don’t think court is the place to fight him. Seemingly though, French law disagrees with me. The mistake Greenwald is making is to assume that it is unreasonable to agree with French law, see value in blasphemy, and stick up for Charlie Hebdo’s right to publish, without being a hypocrite.

In order to make his case of hypocrisy Greenwald, once again, chooses to mischaracterise what Charlie Hebdo did, what they were killed for and why people rightfully expressed solidarity.

It was only when anti-Islam cartoons were at issue, and a few Muslims engaged in violence, did they suddenly become animated and passionate about free speech. That’s because legitimizing anti-Islam rhetoric and demonizing Muslims was their actual cause; free speech was just the pretext.

I think it predictable that slaughter and mayhem might provoke passion and animation and that its suddenness would be directly proportional to the suddenness of the violence. This is regardless of whether Islam is involved or not. By what logic does Greenwald make the assumption that a dislike of Islam, rather than a dislike of slaughtering cartoonists for blasphemy, is the animating factor here?

Without pretending this is so he is unable to then falsely compare it to the lack of objection to the legally-approved French treatment of hate speech and thus demonstrate hypocrisy.

Note how he moves seamlessly from support of an anti-religious cartoon to wishing to ‘demonize’ the followers. This is how he does it, a bait and switch. He seeks to prove hypocrisy by mischaracterising the blasphemy for which they were killed as the equivalent of the illegal racism of others .

A year ago Greenwald made this hypocrisy case by comparing it to antisemitism and the reaction to it.

He is pretending to make the following point:

But what he is actually saying is:

“If you thought that Charlie Hebdo were right to draw Mohammed then you can’t object when others are racist.”

They insisted that it was not enough to denounce or condemn those who murdered the Hebdo cartoonists. Instead, they tried to impose a new obligation: one must celebrate and embrace the ideas of the Hebdo cartoonists, support the granting of awards to them, cheer for the substance of their views. Failure to embrace the ideas of Charlie Hebdo (rather than just their free speech rights) subjected one to accusations — by the world’s slimiest smear artists — that one was failing to uphold their rights of free expression or, worse, that one sympathized with their killers.

Greenwald doesn’t mean the idea of religious satire in a general sense. He suggests people demand that you have to agree with all of the specific content of Charlie Hebdo. I say this is false. Supporting, and advocating the supporting of, their bravery in continuing to blaspheme and stand in solidarity with Jyllands-Posten, under threat of death, is not to say you must agree with all of their content all of the time.

You can claim that some of what Charlie Hebdo did is bad (I don’t), even that it is anti-Muslim (I don’t), and still completely agree that the work they were killed for, namely the blasphemy and religious mockery, is distinct and of value. It is even easier to make the case for supporting it and disseminating it when it is threatened by violence.

In attacking the ‘slimiest smear artists’, he is actually addressing the reaction many, including myself, had to the ‘but’ brigade. Those that would say, “Of course nobody should be murdered for drawing a cartoon but they were virulent racists…” etc.

The objection to statements like this came not from an insistence that one must agree with the contents of the magazine but that the formulation and its timing hints at something malign, namely that the author is blaming the victims and/or minimising the crime of their murderers.

If your opening section of a piece about the newly dead expresses your agreement with the murderer’s opinion of them then it may well raise questions. If the synopsis of that opinion is a smear and a mischaracterisation then the suspicions are only raised further.

If you then seek to highlight examples which they were not murdered for AND these examples too are false, then it really doesn’t require the ‘slimiest of smear artists’ to start questioning your sympathies.

If what Greenwald says is on the up he should have had little difficulty a year ago demonstrating where Charlie Hebdo were demonising all Muslims. Instead, for example, he falsely claimed that the following cartoon was “mocking the African sex slaves of Boko Haram as welfare queens.” 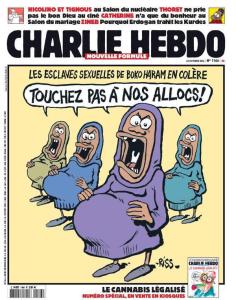 Greenwald has had plenty of time to learn that the abuse of asylum seekers and immigrants by French nativists is the target of the satire but he shows no sign of acknowledgement.

Those he derides for stating he should acknowledge the value of printing the Mohammed cartoons were not also insisting that he supports the point made in the above cartoon. Not even what it actually meant let alone what Greenwald pretends it does.

He wasn’t attacked because he refused to say he liked Charlie Hebdo but because he smeared them in his first piece after they were slaughtered and because he pretended that blasphemy was racism.

Charlie Hebdo’s staff were not killed for the persistent demonising of a minority or for racism or for anything of the sort. They were killed for blasphemy. The killers were abundantly clear on this point.

The riots, calls to murder, and the razing of embassies following the Danish cartoons publication did not constitute a movement speaking in solidarity to the Muslim underclasses of Europe. These occurred across the world and in Muslim majority countries. They were religious chauvinism. They were ‘avenging the Prophet’ and defending religious honour.

The attacks on Charlie Hebdo were a continuation of this and it was against this that people stood in solidarity. The objections to BDS campaigners and Dieudonné M’bala M’bala are not the same thing. You are not being hypocritical when you say that the blasphemy for which they were specifically murdered is valuable and antisemitism and racism is not. Greenwald insists on conflating them.

As Caroline Fourest puts it:

Others, completely irresponsible, with their twisted minds, insidious semantics and complicit blindness have again started to fabricate targets, by confusing blasphemy with “Islamophobia”.

If Greenwald says that free speech on the continent should better resemble the American model under which he operated as a lawyer, I would agree with him. If he wishes to campaign against hate speech laws in Europe, and in particular France, I will support him. But if he does so by saying that Charlie Hebdo were doing the same thing as Dieudonné M’bala M’bala or Der Stürmer,  I will say he is still, one year on, lying.

When confronted by events which generate conclusions unfavourable to our existing and cherished views, we have a bad habit of saying things which we later regret. Sometimes we abandon logic or decency and sometimes we lash out at the wrong people. Fortunately, some reflection often brings the best out in us and we reassess and we adapt and we evolve. This happened for some that disparaged Charlie Hebdo in the same articles, and sometimes in the same paragraphs, which condemned their slaughter. But not for Glenn Greenwald.

2 thoughts on “Glenn Greenwald – “One Year On””