This is an edited version of the author’s original post on Medium, kindly reproduced with his permission.

The Socialist Workers Party are right about one thing at least – the Labour Party is indeed imbued with “electoralism”. Labour Party members believe that Labour needs to be in Government to change things for the better. The big split is that while the PLP believe Corbyn is the main obstacle to power, many of his supporters believe it to be the PLP.

I believe the 80% of the PLP who have no confidence in Corbyn winning to be absolutely correct. Why? One issue. Northern Ireland.

Jeremy Corbyn, along with John McDonnell, was among those on the Left who gave critical support to the Provisional IRA “against British Imperialism”. He may, in the leftist parlance of the time, not have agreed with some of their methods but they were deserving of solidarity. Now this is being dishonestly dressed up as Corbyn being ahead of his time and helping to bring about the peace process by talking to the Republicans. This refusal to face what Corbyn’s views actually were could be a major factor in destroying the Labour vote in many parts of the country (e.g. Birmingham and Warrington to take the obvious examples).

For those who are willing to take the time, I suggest you read the articles in the Daily Telegraph and the Spectator. To summarise, Jeremy Corbyn was on the editorial board of “London Labour Briefing” (LLB) in the 1980s. After the Brighton bombing in 1984, LLB ran an editorial condemning it. Cue an angry reaction from readers and the next editorial ran an apology for the condemnation and reemphasised its support for Sinn Fein and the IRA.

If any Sinn Fein members or supporters happen to be reading this, you should put your feelings of nostalgia and gratitude towards Jeremy Corbyn’s support for the Republican Movement to one side for the moment and look at the following.

Jeremy Corbyn is a founder member of the Labour Representation Committee (LRC) as is John McDonnell (it’s Chair for many years). At the LRC AGM 2012 on November 12, the following motion, moved by Gerry Downing’s Socialist Fight grouping, was passed:

A report in “Weekly Worker” stated the following:

Prison officer David Black was killed by “dissident Republicans” on November 1st 2012. Caitriona Ruane, Sinn Fein MLA, called his killing a “pointless murder” and Martin McGuinness even expressed a willingness to go to his funeral . In fact McGuinness went as far as issuing a joint statement with then First Minister David Robinson to appeal for help to catch the killers, saying that an attack on any member of the Northern Ireland Prison Service was “an attack on all of us”.

Meanwhile, eleven days after the murder of David Black, the LRC (Chair John McDonnell, founder member Jeremy Corbyn) supported a motion not only calling this killing “political” but also for the freeing of the perpetrators. In other words, an act of political solidarity with those, (the Continuity IRA, the Real IRA etc.), who would wish Northern Ireland to return to the worst days of the “troubles”.

Perhaps one day, the Chair of the LRC, John McDonnell MP will offer an explanation for that organisation’s political solidarity with “dissident Republicans”. Perhaps, one day, a founder member of the LRC, the Leader of Her Majesty’s Most Loyal Opposition, Jeremy Corbyn, might offer his view on the LRC’s political solidarity with the killers of David Black.

Did either Jeremy Corbyn or John McDonnell vote for Motion 4? I’ve no idea. Maybe that question will come up in the General Election too.

I’ll try to be charitable and say the LRC, alongside Corbyn and McDonnell, are perfect examples of ultra-left, student union politicians. An “anti-imperialist” motion like this would have been voted for without thinking of any consequences. It’s not as if it would really have any effect on the Northern Ireland peace process. After all, it’s not as if Jeremy Corbyn or John McDonnell were holding leading positions in the Labour Party then.

They do now though.

John McDonnell said in 1998, in an interview with An Phoblacht (the Sinn Fein newspaper), “An assembly is not what people have laid down their lives for over thirty years. We want peace, but the settlement must be just and the settlement must be for an agreed and united Ireland.” Reading this, I, for one, am glad John McDonnell was not a Sinn Fein leader during the negotiations which lead to the Good Friday Agreement.

In May 1987, the Sunday Express ran a front page story where it said Jeremy Corbyn stood for a minute’s silence for eight IRA members who had been killed by the British Army in Ireland. 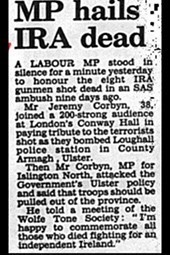 Afterwards he was quoted as saying, “I’m happy to commemorate all those who died fighting for an independent Ireland.” The meeting had been organised by the “Wolfe Tone Society” which was set up in London in 1984 to support Sinn Fein and its policies, including support for the IRA.

How might all this play out in a General election though?

Here’s how I picture that might look on a Conservative Party billboard in a General Election campaign:

Imagine that billboard in Birmingham or in Warrington during a General Election campaign. Imagine it throughout the whole of the United Kingdom. In Glasgow, where I come from, sectarian and political tensions would be dangerously stoked up. And, if Corbyn supporters believe all this talk of supporting the IRA is a “smear”, let’s wait until a General Election debate between Jeremy Corbyn and Theresa May — “Were you or were you not at the Wolfe Tone Society meeting where you stood for a minute’s silence for IRA terrorists, Mr Corbyn? Were you or were you not a member of the editorial board of London Labour Briefing who supported the IRA bombing of the Conservative Party conference in 1984, Mr Corbyn?”

Would the Conservative Party be at fault for publishing such a poster?

In my opinion, it would not. Conservatives want power, they want to win and they are perfectly entitled to use all legitimate political means to achieve that end. Highlighting Jeremy Corbyn’s backing for the IRA would be part of that.

The blame for such a poster being published would lie entirely with Jeremy Corbyn and all of those of his supporters who know his views and history regarding the IRA and back him for Labour leader. I would also blame those prominent supporters (particularly Trade Union leaders) who have heard these accusations but either don’t want to investigate the truth of the matter or know the truth and want a quiet life.

They would all be responsible for Jeremy Corbyn leading Labour to a devastating, catastrophic rout at a General Election.

If Jeremy Corbyn wins the Labour leadership (again), I would paraphrase George Orwell and say, if you want a vision of the future, imagine the Tories laughing in Labour’s face again and again for the next ten, fifteen, twenty years (at least).