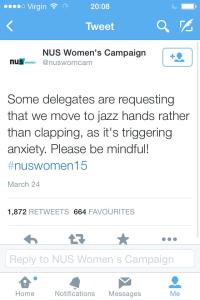 The recent attitude displayed by the NUS Women’s campaign received scorn on twitter and elsewhere but they revealed a mindset undimmed by shame or contrition. Whether it was suggesting clapping be replaced by jazz hands, or insisting gay men stop culturally appropriating black women, the absurdity of these suggestions were plain to see. Yet, despite this, the values that informed these suggestions – emphasising narratives over facts, and identity over principles – is espoused unabashedly by many, and therefore merits examination.

The influence of these values is clear and growing. In universities, Individual liberty and moral universalism continues to dwindle whilst identity politics and a culture of moral relativism flourishes. Freedom of speech, a pre-condition for free and open societies, is being curbed by censorship and self-censorship, from debates to classrooms to online forums. This censorious climate is caused by a widespread belief that the freedom to express oneself must be balanced against securing the comfort of those without ‘privilege’. The assumption of individual liberty – and its possibility of offending anyone – is replaced by an assumption of collective responsibility to tiptoe around our thoughts, trying desperately not to offend those most vulnerable in society- namely people of colour, LGBT people and women. Freedom is speech is transformed from a right into a privilege, to be exercised responsibly in accordance with particular issues.

Firstly, self-censorship is nourished by this attitude: individual viewpoints are burdened with the responsibility of not being offensive when talking about issues that affect victimised groups. An offence to them, it is argued, constitutes an act of oppression, disabling their dignity and therefore requiring a response even – especially!  – at the expense of certain principles; principles are married with privilege and thus are meaningful only in consequential terms. Because of this, censorship in some instances can be excused under the invocation of victimhood – and the consequent challenge to privilege – however spurious: from no-platforming feminists with the ‘wrong’ and ‘oppressive’ opinions to banning music videos with the ‘wrong’ and ‘oppressive’ messages. And because of this, the central tenets of liberalism are unravelling in a relativistic swamp. The fundamental logic justifying this new censorship is indistinguishable from the logic that justified old censorship: the sheer arbitrariness of ‘offence’ legislating against individual liberty and conscience. Who is defined as oppressors and oppressed is done spuriously, one persons oppressors is another persons oppressed – to some, because of her identity, Julie Bindel qualifies as a victim. However, because of her views on Trans issue and Islam, her censorious critics paint her as a perpetrator of oppression. The fact that her censors don’t subscribe to objectivity means that there isn’t a meaningful criterion for distinguishing whether she is privileged or unprivileged – they rely on a binary that doesn’t account for the fluidity of identity and beliefs. Liberal minded people rely on an insistence on objective principles. Julie Bindel should be afforded the right to express her beliefs unencumbered by attempts to silence or intimidate her, as should anyone expressing their beliefs irrespective of whether their identity qualifies as victimiser or not.

We live in a world where the lucid expositions of Locke and Paine have lost their allure and potency and given way to postmodernism: an ideology so convulsed by a cult of victimhood it censors without compunction under the pretext of protecting the ‘victims’ and arraigning the ‘privileged’. It is through this context that we can observe the flourishing of safe spaces, trigger warnings and cultural appropriation. These practices contain within them principles one can reasonably be sympathetic with: empowerment of previously persecuted groups and an attack on structural inequality. The incontestable progress made by society partially depended on advocacy of these principles, it would be wrong to entirely dismiss them.

However, when these beliefs – admittedly noble – are shot through with the fanaticism induced by identity politics, then censorship and the policing of behaviour is normalised: a vital component of free societies –  individual rights – is made secondary to special rights accorded to groups, people are thereby viewed through regimented and differentiated moral prisms rather than through a universalism that views each person as an individual. Following from this, people are infantilised; People who, by accident of birth, happen to be ‘privileged’ have their behaviour and individual conscience policed; It also infantilises the victimised groups who, by accident of birth, are assumed to be allergic to controversial views, and are thus mollycoddled from dangerous and contestable beliefs. It is therefore counter-productive to its stated aims of empowering victimised groups.

It is also wrong in principle. It is carried out with noble intentions, confidently posturing as ameliorative. It intends to inoculate downtrodden groups from dangerous ideas and the hostile terrain of those with privilege. In reality, it limits civil discourse and stifles the engine of free societies: the capacity to discuss ideas and express one’s moral convictions with the inviolable liberty conferred to all citizens. This is why, most of all, this new manifestation of censorship necessitates a rebuttal.

James Snell has written a piece arguing the concept of trigger warnings is both wrong in principle and counter-productive in practice.

Robbie Travers has written a critique of the concept of cultural appropriation. Arguing it is myopic, dysfunctional and fundamentally reactionary.

3 thoughts on “A rebuttal to the censorious student Left”