Twitter can be a very useful thing. Like many of you, I’ve met all sorts of people I never would have otherwise, and among them is James Vaughan, a fellow Welshman and a historian specializing in the Britain-Israel relationship. He regularly posts fascinating snippets from the archives as his work unearths them, but today, he’s surpassed himself. Found among the private papers of forgotten Labour legend – and passionate Zionist – Peter Shore MP was this clipping of a Max Hastings column, originally published in the Evening Standard on August 6th, 1980. Click the link or image below for the full-sized version, which is quite legible despite its age. 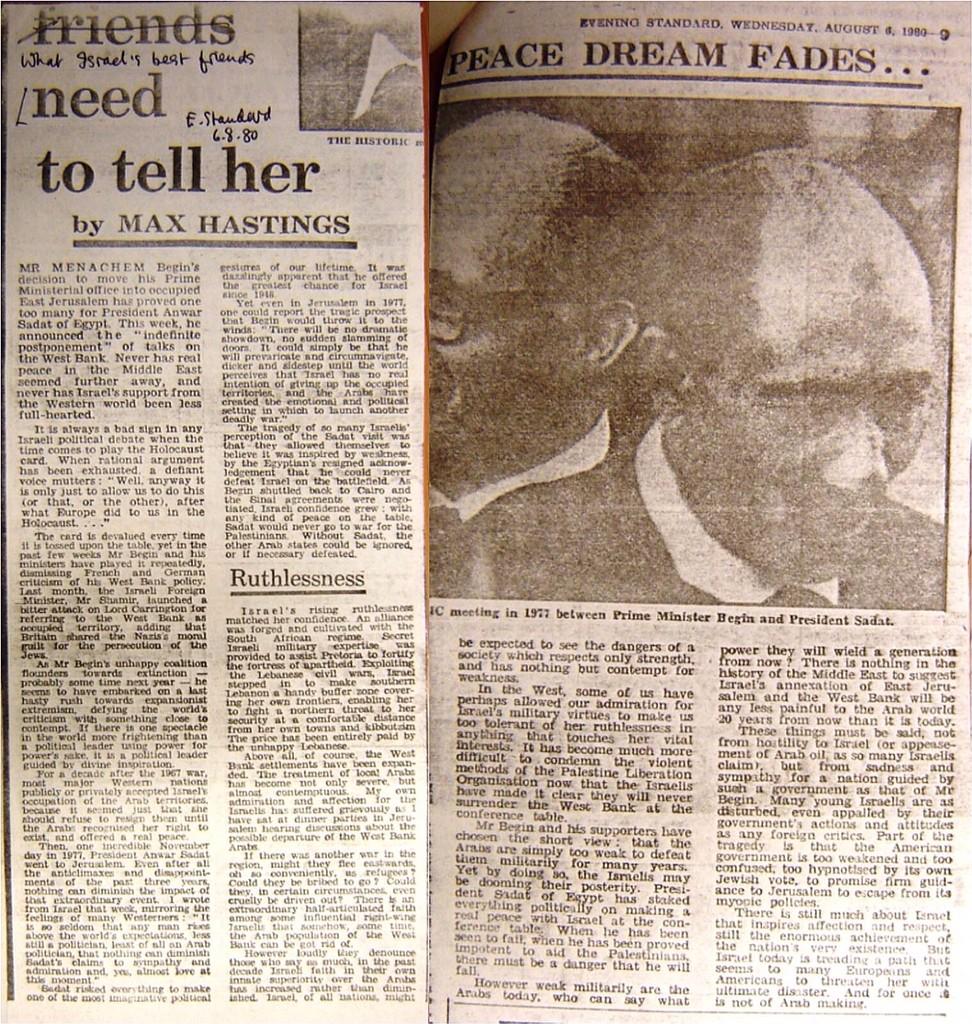 Meet the old Hastings, same as the new Hastings.

Those of you who read my last post should find all this very familiar. So much so, in fact, that my rebuttal to Hastings’ 2014 Israel-bashing applies almost in its entirety to the 1980 version, so I shan’t repeat myself. Suffice it to say that this discovery… complicates Hastings’ claim to be a stalwart ally of the Jewish state, only driven to harsh words by events. In fact, the Hastings of 1980 minces his words much less than his older self. I’d like, in particular, to draw your attention to two phrases that occur in the above clipping.

In the second paragraph, Menachem Begin is already being accused of “play[ing] the Holocaust card”. The problem here, I should stress, is not that Begin’s frequently-made analogies to Nazism, and those of the Israeli right in general, should be unchallenged. Here is Amos Oz eloquently responding to Begin on this point, and here is Leon Wieselter doing the same to his successors, twenty years later. This is all very much within the bounds of permissible debate.

What is not, and never can be, is the phrase “playing the Holocaust card”. Rather than being a critique of any specific invocation of the Nazi era, this instead sweepingly categorizes all such analogies as illegitimate and cheap. Look at those Jews, bringing up the Holocaust again, so typical… But why, on a moment’s reflection, should Israeli statesmen never mention the Shoah? Israel is one nation for which “existential threat” is not an abstract cliche, but simply a memory. It is never far from the minds of Israeli leaders, and with good reason.

This reality leads many observers of Israel to another well-meant but wrongheaded conclusion: that the behaviour they deplore in Israelis is somehow the result of collective Post-Traumatic Stress Disorder. In this narrative, whose seductive simplicity is warning enough, the battered, beleaguered survivors of genocide find their promised land in 1948, but are so damaged by their experiences that they almost immediately start taking it out on the poor Arabs. “Those to whom evil is done/Do evil in return”, as Auden put it, just as wrongly.

Not only is this pop-psychological approach insulting and analytically lazy, it misunderstands Zionism and its history on the most fundamental level. For one thing, the Zionist presence in the Holy Land predates the rise of Hitler by the better part of a century. Rather than spurring the creation of Israel, the Holocaust instead proved all its founders’ worst fears correct in the most horrific way imaginable. The true relevance of the Shoah to the Zionist project is best embodied, I think, by this short video:

Still images of the jets over Auschwitz adorn the office walls of many an Israeli general or politician, I am reliably informed, and the reason has nothing to do with bitterness or revenge. Put simply, Zionism is founded not, as its critics claim, on the embrace of victimhood, but its rejection. Hounded from country to country, expropriated, beaten, humiliated and killed in their thousands and millions, the Jewish people finally said, in as many words, “OK, we get it. You don’t want us, and you won’t protect us. In that case, we’ll simply have to do it ourselves”.

And so they did, and will never be forgiven for it. These are the graves you are skipping on when you throw around pat phrases like “playing the Holocaust card”. Thinking deeply and carefully before engaging in debates about Zionism and the Holocaust is the very least we owe the six million, but to Hastings and too many like him, this engagement is limited to “there they go again”. The Shoah will recede from political debate as soon as Jewish survival is no longer in question, so I shouldn’t hold my breath.

The second, much more shocking phrase occurs in the second paragraph from the end. Here we learn that the American government is “too hypnotised by its own Jewish vote” to act decisively against Israel. Yes, “hypnotised”. Anyone with the faintest knowledge of antisemitism – which apparently doesn’t include Max Hastings – should instinctively recoil from the choice of verb alone. Hypnosis, in one form or another, is precisely what Jews have long been accused of inflicting on the majority, the central indictment of Jew-hatred.

Antisemites, you see, are faced with an obvious problem in making their case: how can it be that “the Jews” so dominate human civilization when they very much appear to be a tiny and despised minority? It’s a tricky one, but resolved easily enough. Jews must somehow possess special powers of deception by which they trick Gentiles into doing their bidding. This is not always put in terms of “hypnosis”, but often has been, the most notorious example being George du Maurier’s 1894 novel Trilby (from which we derive the term “svengali”, not incidentally). My late colleague George Orwell has more on this, if you’re interested.

But the calamitous – at best – wording is only the start. Jews comprise, depending on how you count, between 1 and 3% of the population of the United States. This isn’t to say they never count in elections – just try throwing a brick in Florida without hitting an aspiring presidential candidate with an Israeli-flag pin in their lapel and a hopeful, hungry grin on their face – but this is ordinary, all-American ethnic politics. Not content with accusing the “Jewish vote” – as if that were one, monolithic thing – of hypnosis, Hastings backs it up with the ancient and familiar implication that Jews, once allowed the benefits of citizenship, will always use them to exert an excessive and unsavoury influence.

Once again, it is entirely possible Hastings intends none of this, and is simply woefully ignorant of what his words convey. But he has no excuse to be, not least as a prolific historian in his own right. This was true in 1980 and even more so today. The debate over Israel and its future is one that non-Jews can and should engage in, but not before doing our homework. Tread softly, for you tread on their ashes.

9 thoughts on “The Battle of Hastings, part two”